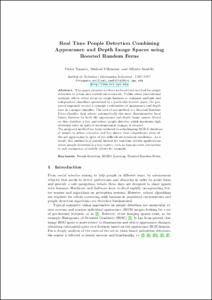 Document typeConference report
PublisherSpringer
Rights accessOpen Access
European Commission's projectCARGO-ANTS - Cargo handling by Automated Next generation Transportation Systems for ports and terminals (EC-FP7-605598)
Abstract
This paper presents a robust and real-time method for people detection in urban and crowed environments. Unlike other conventional methods which either focus on single features or compute multiple and independent classifiers specialized in a particular feature space, the proposed approach creates a synergic combination of appearance and depth cues in a unique classifier. The core of our method is a Boosted Random Ferns classifier that selects automatically the most discriminative local binary features for both the appearance and depth image spaces. Based on this classifier, a fast and robust people detector which maintains high detection rates in spite of environmental changes is created. The proposed method has been validated in a challenging RGB-D database of people in urban scenarios and has shown that outperforms state-of-the-art approaches in spite of the difficult environment conditions. As a result, this method is of special interest for real-time robotic applications where people detection is a key matter, such as human-robot interaction or safe navigation of mobile robots for example.
CitationVaquero, V., Villamizar, M.A., Sanfeliu, A. Real time people detection combining appearance and depth image spaces using boosted random ferns. A: Iberian Robotics Conference. "Robot 2015: Second Iberian Robotics Conference". Lisboa: Springer, 2015, p. 587-598.
URIhttp://hdl.handle.net/2117/83442
DOI10.1007/978-3-319-27149-1_45
ISBN978-3-319-27149-1
Publisher versionhttp://link.springer.com/chapter/10.1007/978-3-319-27149-1_45
Collections
Share: