Ion-doping as a strategy to modulate hydroxyapatite nanoparticle internalization 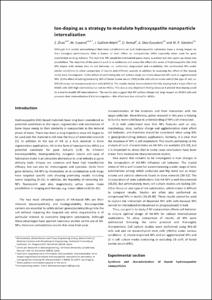 Except where otherwise noted, content on this work is licensed under a Creative Commons license : Attribution-NonCommercial-NoDerivs 3.0 Spain
Abstract
Although it is widely acknowledged that ionic substitutions on bulk hydroxyapatite substrates have a strong impact on their biological performance, little is known of their effect on nanoparticles (NPs) especially when used for gene transfection or drug delivery. The fact that NPs would be internalized poses many questions but also opens up many new possibilities. The objective of the present work is to synthesize and assess the effect of a series of hydroxyapatite-like (HA) NPs doped with various ions on cell behavior, i.e. carbonate, magnesium and co-addition. We synthesized NPs under similar conditions to allow comparison of results and different aspects in addition to assessing the effect of the doping ion(s) were investigated: (1) the effect of performing the cell culture study on citrate-dispersed NPs and on agglomerated NPs, (2) the effect of adding/excluding 10% of foetal bovine serum (FBS) in the cell culture media and (3) the type of cell, i.e. MG-63 versus rat mesenchymal stem cells (rMSCs). The results clearly demonstrated that Mg-doping had a major effect on MG-63 cells with high cytotoxicity but not to rMSCs. This was a very important finding because it proved that doping could be a tool to modify NP internalization. The results also suggest that NP surface charge had a large impact on MG-63 cells and prevents their internalization if it is too negative—this effect was less critical for rMSCs
CitationZhao, Z., Español, M., Guillem-Marti, J., Kempf, D., Diez, A., Ginebra, M.P. Ion-doping as a strategy to modulate hydroxyapatite nanoparticle internalization. "Nanoscale", 2016, vol. 8, núm. 3, p. 1595-1607.
URIhttp://hdl.handle.net/2117/83440
DOI10.1039/c5nr05262a
ISSN2040-3364
Publisher versionhttp://pubs.rsc.org/en/Content/ArticleLanding/2016/NR/C5NR05262A#!divAbstract
Collections
Share: