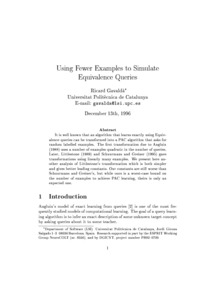 Document typeExternal research report
Rights accessOpen Access
Abstract
It is well known that an algorithm that learns exactly using Equivalence queries can be transformed into a PAC algorithm that asks for random labelled examples. The first transformation due to Angluin (1988) uses a number of examples quadratic in the number of queries. Later, Littlestone (1989) and Schuurmans and Greiner (1995) gave transformations using linearly many examples. We present here another analysis of Littlestone's transformation which is both simpler and gives better leading constants. Our constants are still worse than Schuurmans and Greiner's, but while ours is a worst-case bound on the number of examples to achieve PAC learning, theirs is only an expected one.
CitationGavaldà Mestre, Ricard. "Using fewer examples to simulate equivalence queries". 1996.
Is part ofLSI-96-66-R
URIhttp://hdl.handle.net/2117/83407
Collections
Share: