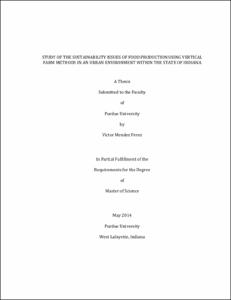 Except where otherwise noted, content on this work is licensed under a Creative Commons license : Attribution-NonCommercial 3.0 Spain
Abstract
There are several problems around the globe related to water scarcity, energy shortages, deforestation and loss of fertile land, and food security. Climate change is making environmental and social issues arise. Issues such as, changes in the agricultural landscape, increasing population (9 billion is the expected population for 2040), rising food borne illnesses, scarcity of drinking water, and more crop failure due to plant pathogens and insect pests, among other factors make this study specially significant. Vertical farming could be a potencial solution to some of these problems. Due to these problems the present thesis analyzed vertical farming as a possible solution for the future of food production. The study has used lettuce as an example of what vertical farming could offer. The analysis was focused on the productivity of the vertical farm, the location within the state of Indiana, the water used, the carbon footprint, and the energy needed to run the vertical farm with 100% supplemental LEDs. The analysis of the data was done using ArcGIS software, and data from the Indianamap website, to create a model that was able to determine the most suitable locations within the State of Indiana. Once the location was determined the author estimated the amount of electrical energy needed to grow lettuce indoors, using LEDs. As well as the energy analysis, the author focused on the water footprint and carbon footprint of the hypothetical vertical farm. The findings of this thesis are both encouraging and discouraging but they also form a starting point for further research. These results are based on the assumptions, limitations and delimitations of this study. The most suitable locations in the State of Indiana to locate a vertical farm, under the parameters used, are Anderson, Brazil, Columbia city, Connersville, Gary, Mishawaka, and Terre Haute. The use of energy just for lighting is around 133million kWh, which is the equivalent to 12,326 American households of four during a year, the water footprint is 33 times less than conventional crops, which is around 237l H2O/kg of lettuce produced. Although the purpose of this thesis was not to generate a comparison of vertical farm to conventional open field agriculture, important data that could form the foundation for such comparison were generated. These data include the carbon footprint that is 56,258 tones of CO2 per year, which are the emissions made by approximate 3,200 Americans during a year, and the productivity of this vertical farm of 10 story vertical farm and dimensions of 100mx100m with stacked drums would be around 8,482 tones of lettuce /year, enough to satisfy the daily needs of fresh vegetables of more than 100,000 people if only were eating lettuce. Some of the recommendations for further research are to include social implications into the analysis, as well as a cost benefit economic analysis of vertical farming methods versus conventional open field to determine the economical feasibility of vertical farms, as well as a detailed comparison of methods between vertical farming and conventional farming.
SubjectsSustainable agriculture, Farms--Environmental aspects, Agricultura sostenible, Explotacions agrícoles
DegreeMÀSTER UNIVERSITARI EN SOSTENIBILITAT (Pla 2009)
Location
1: Jefferson Township, IN, Estats Units d'Amèrica
URIhttp://hdl.handle.net/2117/83402
Collections
Share: