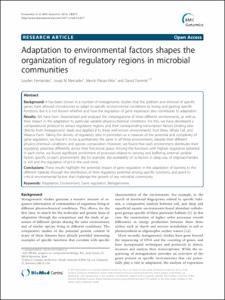 Show full item record
Fernandez, Leyden
Mercader, Josep M.
Planas-Fèlix, Mercè
Torrents, David
Document typeArticle
PublisherBioMed Central
Rights accessOpen Access
ProjectESTUDIOS A GRAN ESCALA Y EN DETALLE DE LAS ESTRATEGIAS Y MECANISMOS RESPONSABLES DE LA EVOLUCION GENICA EN VERTEBRADOS Y SU IMPLICACION EN LA GENERACION DE DIVERSIDAD BIOLOGICA. (MEC-BIO2006-15036)
Abstract
Background: It has been shown in a number of metagenomic studies that the addition and removal of specific genes have allowed microbiomes to adapt to specific environmental conditions by losing and gaining specific functions. But it is not known whether and how the regulation of gene expression also contributes to adaptation. Results: We have here characterized and analyzed the metaregulome of three different environments, as well as their impact in the adaptation to particular variable physico-chemical conditions. For this, we have developed a computational protocol to extract regulatory regions and their corresponding transcription factors binding sites directly from metagenomic reads and applied it to three well known environments: Acid Mine, Whale Fall, and Waseca Farm. Taking the density of regulatory sites in promoters as a measure of the potential and complexity of gene regulation, we found it to be quantitatively the same in all three environments, despite their different physico-chemical conditions and species composition. However, we found that each environment distributes their regulatory potential differently across their functional space. Among the functions with highest regulatory potential in each niche, we found significant enrichment of processes related to sensing and buffering external variable factors specific to each environment, like for example, the availability of co-factors in deep sea, of oligosaccharides in soil and the regulation of pH in the acid mine. Conclusions: These results highlight the potential impact of gene regulation in the adaptation of bacteria to the different habitats through the distribution of their regulatory potential among specific functions, and point to critical environmental factors that challenge the growth of any microbial community.
CitationFernandez, Leyden [et al.]. Adaptation to environmental factors shapes the organization of regulatory regions in microbial communities. "BMC Genomics", 08 Octubre 2014, vol. 15, núm. 877.
URIhttp://hdl.handle.net/2117/83398
DOI10.1186/1471-2164-15-877
ISSN1471-2164
Publisher versionhttp://bmcgenomics.biomedcentral.com/articles/10.1186/1471-2164-15-877
Collections
Share:

Except where otherwise noted, content on this work is licensed under a Creative Commons license : Attribution 4.0 International