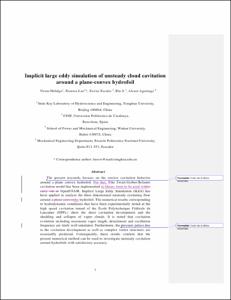 Except where otherwise noted, content on this work is licensed under a Creative Commons license : Attribution-NonCommercial-NoDerivs 3.0 Spain
Abstract
The present paper focuses on the erosive cavitation behavior around a plane convex hydrofoil. The Zwart-Gerber-Belamri cavitation model is implemented in a library form to be used with the OpenFOAM. The implicit large eddy simulation (ILES) is applied to analyze the three dimensional unsteady cavitating flow around a plane convex hydrofoil. The numerical results in the cases under the hydrodynamic-conditions, which were experimentally tested at the high speed cavitation tunnel of the École Polytechnique Fédérale de Lausanne (EPFL), clearly show the sheet cavitation development, the shedding and the collapse of vapor clouds. It is noted that the cavitation evolutions including the maximum vapor length, the detachment and the oscillation frequency, are captured fairly well. Furthermore, the pressure pulses due to the cavitation development as well as the complex vortex structures are reasonably well predicted. Consequently, it may be concluded that the present numerical method can be used to investigate the unsteady cavitation around hydrofoils with a satisfactory accuracy. © 2015 Publishing House for Journal of Hydrodynamics.
CitationHidalgo, V., Luo, X., Escaler, X., Ji, B., Aguinaga, A. Implicit large eddy simulation of unsteady cloud cavitation around a plane-convex hydrofoil. "Journal of Hydrodynamics", 01 Desembre 2015, vol. 27, núm. 6, p. 815-823.
URIhttp://hdl.handle.net/2117/83364
DOI10.1016/S1001-6058(15)60544-3
ISSN1001-6058
Collections
Share: