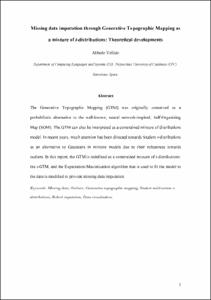 The Generative Topographic Mapping (GTM) was originally conceived as a probabilistic alternative to the well-known, neural network-inspired, Self-Organizing Map (SOM). The GTM can also be interpreted as a constrained mixture of distributions model. In recent years, much attention has been directed towards Student t-distributions as an alternative to Gaussians in mixture models due to their robustness towards outliers. In this report, the GTM is redefined as a constrained mixture of t-distributions: the t-GTM, and the Expectation-Maximization algorithm that is used to fit the model to the data is modified to provide missing data imputation.
CitationVellido, A. "Missing data imputation through generative topographic mapping as a mixture of t-distributions: Theoretical developments". 2004.
Is part ofLSI-04-50-R
URIhttp://hdl.handle.net/2117/83308