Candidate selection algorithms in opportunistic routing based on distance progress 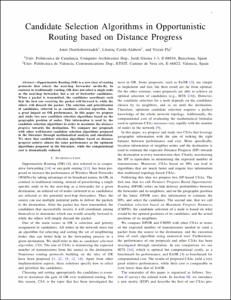 Pla Boscà, Vicent
Document typeArticle
Rights accessOpen Access
All rights reserved. This work is protected by the corresponding intellectual and industrial property rights. Without prejudice to any existing legal exemptions, reproduction, distribution, public communication or transformation of this work are prohibited without permission of the copyright holder
Abstract
Opportunistic routing (OR) is a new class of routing protocols that selects the next-hop forwarder on-the-fly. In contrast to traditionally routing, OR does not select a single node as the next-hop forwarder, but a set of forwarder candidates. When a packet is transmitted, the candidates coordinate such that the best one receiving the packet will forward it, while the others will discard the packet. The selection and prioritisation of candidates, referred to as candidate selection algorithm (CSA), has a great impact on OR performance. In this paper we propose and study two new candidate selection algorithms based on the geographic position of nodes. This information is used by the CSAs in order to maximise the distance progress (DP) towards the destination. We compare our proposals with other well-known CSAs proposed in the literature through mathematical analysis and simulation. We show that candidate selection algorithms based on DP achieve almost the same performance as the optimum algorithms proposed in the literature, while the computational cost is dramatically reduced.
CitationDarehshoorzadeh, A., Cerdà, L., Pla, V. Candidate selection algorithms in opportunistic routing based on distance progress. "International journal of Ad Hoc and ubiquitous computing", 01 Gener 2015, vol. 20, núm. 3, p. 137-147.
URIhttp://hdl.handle.net/2117/83299
DOI10.1504/IJAHUC.2015.073168
ISSN1743-8225
Publisher versionhttp://www.inderscience.com/info/inarticle.php?artid=73168
Collections
Share: