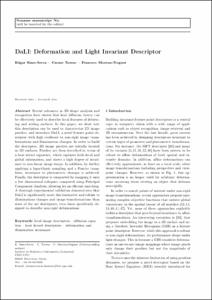 Recent advances in 3D shape analysis and recognition have shown that heat diffusion theory can be effectively used to describe local features of deforming and scaling surfaces. In this paper, we show how this description can be used to characterize 2D image patches, and introduce DaLI, a novel feature point descriptor with high resilience to non-rigid image transformations and illumination changes. In order to build the descriptor, 2D image patches are initially treated as 3D surfaces. Patches are then described in terms of a heat kernel signature, which captures both local and global information, and shows a high degree of invariance to non-linear image warps. In addition, by further applying a logarithmic sampling and a Fourier transform, invariance to photometric changes is achieved. Finally, the descriptor is compacted by mapping it onto a low dimensional subspace computed using Principal Component Analysis, allowing for an efficient matching. A thorough experimental validation demonstrates that DaLI is significantly more discriminative and robust to illuminations changes and image transformations than state of the art descriptors, even those specifically designed to describe non-rigid deformations.
CitationSimo, E., Torras, C., Moreno-Noguer, F. DaLI: deformation and light invariant descriptor. "International journal of computer vision", 01 Novembre 2015, vol. 115, núm. 2, p. 136-154.
URIhttp://hdl.handle.net/2117/83179
DOI10.1007/s11263-015-0805-1
ISSN0920-5691
Publisher versionhttp://link.springer.com/article/10.1007/s11263-015-0805-1