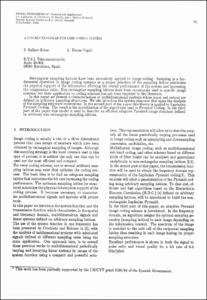 Except where otherwise noted, content on this work is licensed under a Creative Commons license : Attribution-NonCommercial-NoDerivs 3.0 Spain
Abstract
Rectangular sampling lattices bave been extensively applied to image coding. Sampling is a fundamental orera.tion m image coding systems as a proper selection of the sampling lattice minimizes the physica support of the informalion affecting the overall performance of the system and increasing the compression ratio. Non-rectangular sampling lattices have been occasionaly used in specific image systems but their application to coding schemes has not been reported in the literature. In this paper we present a characterization of multidimensional systems whose input and output are defined on arbitrary sampling structures. We also introduce the system response that eases the analysis of the sampling structure conversions. In the second part of the paper this theory is aplied to Laplacian Pyramid Coding. The result is the modelization of the algoríthms used in Pyramid Coding. In the third part of the paper this model is used to describe an efficient adaptive Pyramid image structure defined on arbitrary non-rectangular sampling lattices.
CitationSallent, S., Torres, L. A non-rectangular pyramid coding system. A: European Signal Processing Conference. "Signal processing IV: theories and applications: proceedings of EUSIPCO-88: Fourth European Signal Processing Conference: Grenoble, France, September 5-8, 1988". Grenoble: 1988, p. 85-88.
URIhttp://hdl.handle.net/2117/83135
DL0 444 70516 3
Publisher versionhttp://www.eurasip.org/Proceedings/Eusipco/Eusipco1988/EUSIPCO88_VolI.pdf
Collections
Share: