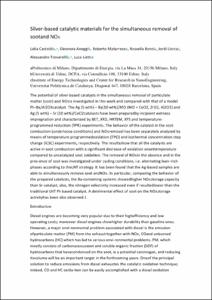 The potential of silver-based catalysts in the simultaneous removal of particulate matter (soot) and NOxis investigated in this work and compared with that of a model Pt-Ba/Al2O3catalyst. The Ag (5 wt%) - Ba (10 wt%)/MO (MO = CeO2, ZrO2, Al2O3) and Ag (5 wt%) - Sr (10 wt%)/CeO2catalysts have been prepared by incipient wetness impregnation and characterized by BET, XRD, HRTEM, XPS and temperature-programmed reduction (TPR) experiments. The behavior of the catalyst in the soot combustion (under loose conditions) and NOxremoval has been separately analyzed by means of temperature programmed oxidation (TPO) and isothermal concentration step change (ICSC) experiments, respectively. The results show that all the catalysts are active in soot combustion with a significant decrease of oxidation onset temperature compared to uncatalyzed soot oxidation. The removal of NOxin the absence and in the presence of soot was investigated under cycling conditions, i.e. alternating lean-rich phases according to the LNT strategy. It has been found that the Ag-based samples are able to simultaneously remove soot and NOx. In particular, comparing the behavior of the prepared catalysts, the Ba-containing systems showed higher NOxstorage capacity than Sr-catalyst; also, the nitrogen selectivity increased even if resulted lower than the traditional LNT Pt-based catalyst. A detrimental effect of soot on the NOxstorage activity has been also observed.
CitationCastoldi, L., Aneggi, E., Matarrese, Roberto, Bonzi, R., Llorca, J., Trovarelli, A., Lietti, L. Silver-based catalytic materials for the simultaneous removal of soot and NOx. "Catalysis today", 01 Desembre 2015, vol. 258, núm. Part 2, p. 405-415.
URIhttp://hdl.handle.net/2117/83125
DOI10.1016/j.cattod.2015.02.024
ISSN0920-5861