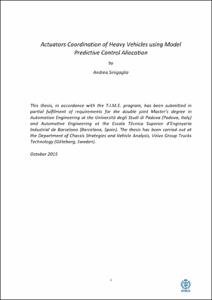 Document typeMaster thesis
Rights accessOpen Access
Abstract
This report proposes the use of a novel method called Model Predictive Control Allocation (MPCA) in order to conveniently coordinate the different actuators present on a heavy vehicle. The actuators analysed in this report are disc brakes, powertrain and rear active steering. All these actuators can technically be controlled by an external electronic device and their utilization has an impact on the planar dynamics of the vehicle. The actuators are designed so that, if the driver wants to modify the vehicle behaviour, there are several ways of using the actuators that lead to the same requested behaviour. This property identifies the vehicle as an over-actuated system. Considering the nature of all the actuators and their effects on the vehicle is essential for the designated method to coordinate the actuators. The method used for the coordination merges the characteristics of two different types of controllers: Model Predictive Control (MPC) and Control Allocation (CA). The potential of a model predictive control method resides in its ability to explicitly take into account the nature of the actuators for a certain time horizon ahead before deciding the control action to be applied to the system. The control allocation, on the other hand, is a suitable method to decide how to combine the actuators in order to modify the behaviour of the vehicle. The peculiarity of these controllers lies in the way they compute the control input to the system. Unlike a classical PID controller, in fact, they use a cost function, which has to be iteratively minimized, in order to find out the best input for the system. Common issues related to this class of controllers are the robustness and speed of the algorithms used to solve the problem. The problem defined by the MPCA controller belongs to the class of Quadratic Programming (QP) problems for which several methods have been developed. A primal-dual interior-point method with Mehrotra’s predictor-corrector is used by the solver selected to deal with the QP problem. In order to evaluate the performance of the controller, three test scenarios have been analysed: split-𝜇� braking, split-𝜇� acceleration and brake blending. In each one of the scenarios there is a need to precisely coordinate the actuators in order to improve the vehicle’s dynamics. The expected behaviour of the controller when facing the three different situations has firstly been analysed and explained. Later, the controller has been validated using simulations and tests on a real vehicle. Both simulations and tests have shown promising results. The controller is able to effectively deal with each one of the situations leading to a satisfactory enhancement of the vehicle dynamics. The controller has also been compared with other methods, a Control Allocation formulation with rate limits and a vehicle without rear active steering (RAS). In general, better performances can be observed during the transitions when using the MPCA formulation rather than the CA formulation and improved stability can be achieved on the vehicle when the RAS is introduced. The different behaviours of the vehicle for every different scenario have been presented and explained.
SubjectsHeavy vehicles -- Automatic control, Predictive control, Programmable controllers, Vehicles pesants -- Control automatic, Control predictiu, Controladors programables
DegreeMÀSTER UNIVERSITARI EN ENGINYERIA D'AUTOMOCIÓ (Pla 2012)
URIhttp://hdl.handle.net/2117/83028
Collections
Share: