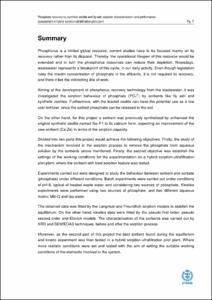 Phosphorus is a limited global resource; current studies have to be focused mainly on its recovery rather than its disposal. Thereby, the operational lifespan of this resource would be extended and in turn the phosphorus resources can reduce their depletion. Nowadays, wastewater represents a breakpoint of this cycle, in our daily activity. Even though legislation rules the maxim concentration of phosphate in the effluents, it is not required its recovery, and there it lies the interesting line of work. Aiming at the development of phosphorus recovery technology from the wastewater, it was investigated the sorption behaviour of phosphate (PO43-) by sorbents like fly ash and synthetic zeolites. Furthermore, with the loaded zeolite can have the potential use as a low cost fertilizer, since the sorbed phosphate can be released to the soil. On the other hand, for this project a sorbent was previously synthetized by enhanced the original synthetic zeolite named Na-P1 to its calcium form, expecting an improvement of the new sorbent (Ca-Ze) in terms of the sorption capacity. Divided into two parts this project would achieve the following objectives. Firstly, the study of the mechanism involved in the sorption process to remove the phosphate from aqueous solution by the sorbents above mentioned. Finally, the second objective was establish the settings of the working conditions for the experimentation on a hybrid sorption-ultrafiltration pilot plant, where the sorbent with best sorption feature was tested. Experiments carried out were designed to study the behaviour between sorbent and sorbate (phosphate) under different conditions. Batch experiments were carried out under conditions of pH 8, typical of treated waste water and considering two sources of phosphate. Kinetics experiments were performed using two sources of phosphate, and two different aqueous matrix; Mili-Q and tap water. The obtained data was fitted by the Langmuir and Freundlich sorption models to stablish the equilibrium. On the other hand, kinetics data were fitted by the pseudo first order, pseudo second order and Elovich models. The characterisation of the sorbents was carried out by XRD and SEM/EDAS techniques, before and after the sorption process. Moreover, as the second part of this project the best sorbent found during the equilibrium and kinetic experiment was then tested in a hybrid sorption-ultrafiltration pilot plant. Where more realistic conditions were set and tested with the aim of setting the suitable working conditions of the elements involved in the system.
MateriasPhosphates -- Absorption and adsorption, Sewage -- Purification -- Phosphates removal, Zeolites, Fly ash, Ultrafiltration, Aigües residuals -- Depuració -- Eliminació de fosfats, Fosfats -- Absorció i adsorció, Zeolites, Cendres volants, Ultrafiltració
URIhttp://hdl.handle.net/2117/83021