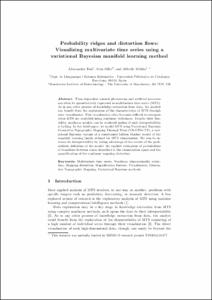 Document typeConference report
PublisherSpringer
Rights accessOpen Access
All rights reserved. This work is protected by the corresponding intellectual and industrial property rights. Without prejudice to any existing legal exemptions, reproduction, distribution, public communication or transformation of this work are prohibited without permission of the copyright holder
Abstract
Time-dependent natural phenomena and artificial processes can often be quantitatively expressed as multivariate time series (MTS). As in any other process of knowledge extraction from data, the analyst can benefit from the exploration of the characteristics of MTS through data visualization. This visualization often becomes difficult to interpret when MTS are modelled using nonlinear techniques. Despite their flexibility, nonlinear models can be rendered useless if such interpretability is lacking. In this brief paper, we model MTS using Variational Bayesian Generative Topographic Mapping Through Time (VB-GTM-TT), a variational Bayesian variant of a constrained hidden Markov model of the manifold learning family defined for MTS visualization. We aim to increase its interpretability by taking advantage of two results of the probabilistic definition of the model: the explicit estimation of probabilities of transition between states described in the visualization space and the quantification of the nonlinear mapping distortion.
CitationTosi, A., Olier, I., Vellido, A. Probability ridges and distortion flows: Visualizing multivariate time series using a variational Bayesian manifold learning method. A: Workshop on Self-Organizing Maps. "Advances in self-organizing maps and learning vector quantization: Proceedings of the 10th International Workshop, WSOM 2014, Mittweida, Germany, July, 2-4, 2014 (Advances in Intelligent Systems and Computing; 295)". Mittweida: Springer, 2014, p. 55-64.
URIhttp://hdl.handle.net/2117/82956
DOI10.1007/978-3-319-07695-9_5
ISBN978-3-319-07695-9
Publisher versionhttp://link.springer.com/chapter/10.1007%2F978-3-319-07695-9_5
Collections
Share: