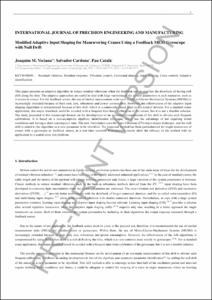 Document typeArticle
PublisherSpringer
Rights accessOpen Access
Abstract
This paper presents an adaptive algorithm to reduce residual vibrations when the feedback sensor used has null drift along the time. The adaptive approaches are useful to deal with large variations of the system parameters at each maneuver, such as it occurs in cranes. For the feedback sensor, the use of inertial measurement units such as Micro-Electro-Mechanical Systems (MEMS) is increasingly extended because of their cost, size, robustness and power consumption. However, the effectiveness of the adaptive input shaping algorithms is compromised because of this drift, which is a commonly raised issue in this kind of devices. The study presented in this manuscript focuses on the development of an automatic compensation of this drift to obviate frequent calibrations. It is based on a non-asymptotic algebraic identification technique, which does not require initial conditions and has a short convergence time. This study uses the Zero-Vibration (ZV) input shaper technique, and the null drift is added to the algorithm as a parameter to be identified. The proposed method is particularized for single maneuvers of cranes with a gyroscope as feedback sensor, in a real time scenario. Experimental results show the efficacy of the method on a scaled crane test platform.
CitationVeciana, J., Cardona, S., Catala, P. Modified adaptive input shaping for maneuvering cranes using a feedback MEM gyroscope with null drift. "International journal of precision engineering and manufacturing", 04 Agost 2015, vol. 16, núm. 9, p. 1911-1917.
URIhttp://hdl.handle.net/2117/82946
DOI10.1007/s12541-015-0248-1
ISSN2234-7593
Collections
Share: