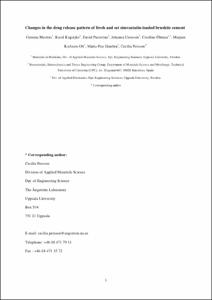 Except where otherwise noted, content on this work is licensed under a Creative Commons license : Attribution-NonCommercial-NoDerivs 3.0 Spain
Abstract
Calcium phosphate cements are synthetic bone graft substitutes able to set at physiological conditions. They can be applied by minimally invasive surgery and can also be used as drug delivery systems. Consequently, the drug release pattern from the cement paste (fresh cement) is of high clinical interest. However, previous studies have commonly evaluated the drug release using pre-set cements only. Therefore, the aim of this work was to determine if the time elapsed from cement preparation until immersion in the solution (3 min for fresh cements, and 1 h and 15 h for pre-set cements) had an influence on its physical properties, and correlating these to the drug release profile. Simvastatin was selected as a model drug, while brushite cement was used as drug carrier. This study quantified how the setting of a material reduces the accessibility of the release media to the material, thus preventing drug release. A shift in the drug release pattern was observed, from a burst-release for fresh cements to a sustained release for pre-set cements. (C) 2015 Elsevier B.V. All rights reserved.
CitationMestres, G., Kugiejko, K., Pastorino, D., Unosson, J., Ohman, C., Karlsson, M., Ginebra, M.P., Persson, C. Changes in the drug release pattern of fresh and set simvastatin-loaded brushite cement. "Materials science and engineering C. Biomimetic and supramolecular systems", 01 Gener 2016, vol. 58, p. 88-96.
URIhttp://hdl.handle.net/2117/82927
DOI10.1016/j.msec.2015.08.016
ISSN0928-4931
Publisher versionhttp://www.sciencedirect.com/science/article/pii/S0928493115302721
Collections
Share: