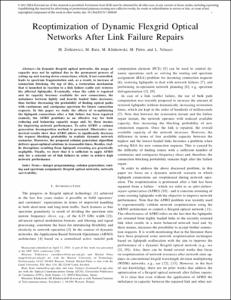 Document typeArticle
PublisherInstitute of Electrical and Electronics Engineers (IEEE)
Rights accessOpen Access
Abstract
In dynamic flexgrid optical networks, the usage of capacity may not be optimal due to the permanent process of setting up and tearing down connections, which, if not controlled, leads to spectrum fragmentation and, as a result, to increase of connection blocking. On top of this, a restoration mechanism that is launched in reaction to a link failure (cable cut) restores the affected lightpaths. Eventually, when the cable is repaired and its capacity becomes available for new connections, the unbalance between lightly and heavily loaded links increases, thus further decreasing the probability of finding optical paths with continuous and contiguous spectrum for future connection requests. In this paper we study the effects of reoptimizing the lightpath connections after a link failure has been repaired [namely, the after-failure-repair optimization (AFRO) problem] as an effective way for both reducing and balancing capacity usage and, by these means, for improving network performance. To solve AFRO a column generation decomposition method is presented. Illustrative numerical results show that AFRO allows us to significantly decrease the request blocking probability in realistic dynamic network scenarios. Moreover, the proposed column generation algorithm delivers quasi-optimal solutions in reasonable times. Besides, traffic disruptions resulting from lightpath rerouting are practically negligible. Finally, we show that it is sufficient to apply AFRO only for a selected set of link failures in order to achieve high network performance.
CitationZotkiewicz, M., Ruiz, M., Klinkowski, M., Pioro, M., Velasco, L. Reoptimization of dynamic flexgrid optical networks after link failure repairs. "Journal of optical communications and networking", 01 Gener 2015, vol. 7, núm. 1, p. 49-61.
URIhttp://hdl.handle.net/2117/82873
DOI10.1364/JOCN.7.000049
ISSN1943-0620
Publisher versionhttp://www.opticsinfobase.org/jocn/viewmedia.cfm?uri=jocn-7-1-49&seq=0
Collections
Share: