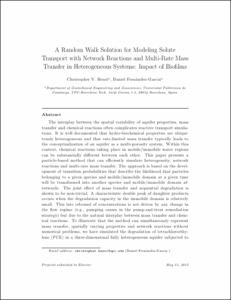 Document typeArticle
PublisherElsevier
Rights accessOpen Access
Abstract
The interplay between the spatial variability of the aquifer hydraulic properties, mass transfer due to sub-grid heterogeneity and chemical reactions often complicates reactive transport simulations. It is well documented that hydro-biochemical properties are ubiquitously heterogeneous and that diffusion and slow advection at the sub-grid scale typically leads to the conceptualization of an aquifer as a multi-porosity system. Within this context, chemical reactions taking place in mobile/immobile water regions can be substantially different between each other. This paper presents a particle-based method that can efficiently simulate heterogeneity, network reactions and multi-rate mass transfer. The approach is based on the development of transition probabilities that describe the likelihood that particles belonging to a given species and mobile/immobile domain at a given time will be transformed into another species and mobile/immobile domain afterwards. The joint effect of mass transfer and sequential degradation is shown to be non-trivial. A characteristic rebound of degradation products can be observed. This late rebound of concentrations is not driven by any change in the flow regime (e.g., pumping ceases in the pump-and-treat remediation strategy) but due to the natural interplay between mass transfer and chemical reactions. To illustrate that the method can simultaneously represent mass transfer, spatially varying properties and network reactions without numerical problems, we have simulated the degradation of tetrachloroethylene (PCE) in a three-dimensional fully heterogeneous aquifer subjected to rate-limited mass transfer. Two types of degradation modes were considered to compare the effect of an active biofilm with that of clay pods present in the aquifer. Results of the two scenarios display significantly differences. Biofilms that promote the degradation of compounds in an immobile region are shown to significantly enhance degradation, rapidly producing daughter products and less tailing.
CitationHenri, C., Fernandez, D. A random walk solution for modeling solute transport with network reactions and multi-rate mass transfer in heterogeneous systems: Impact of biofilms. "Advances in water resources", Desembre 2015, vol. 86, núm. Part A, p. 119-132.
URIhttp://hdl.handle.net/2117/82872
DOI10.1016/j.advwatres.2015.09.028
ISSN0309-1708
Publisher versionhttp://www.sciencedirect.com/science/article/pii/S0309170815002353
Collections
Share: