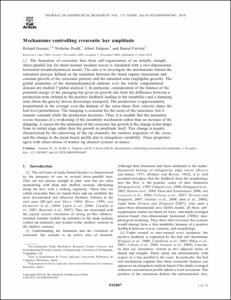 Document typeArticle
Rights accessOpen Access
Abstract
The formation of crescentic bars from self-organization of an initially straight shore-parallel bar for shore-normal incident waves is simulated with a two-dimensional horizontal morphodynamical model. The aim is to investigate the mechanisms behind the saturation process defined as the transition between the linear regime (maximum and constant growth of the crescentic pattern) and the saturated state (negligible growth). The global properties of the morphodynamical patterns over the whole computational domain are studied (“global analysis”). In particular, consideration of the balance of the potential energy of the emerging bar gives its growth rate from the difference between a production term (related to the positive feedback leading to the instability) and a damping term (from the gravity-driven downslope transport). The production is approximately proportional to the average over the domain of the cross-shore flow velocity times the bed level perturbation. The damping is essential for the onset of the saturation, but it remains constant while the production decreases. Thus, it is notable that the saturation occurs because of a weakening of the instability mechanism rather than an increase of the damping. A reason for the saturation of the crescentic bar growth is the change in bar shape from its initial stage rather than the growth in amplitude itself. This change is mainly characterized by the narrowing of the rip channels, the onshore migration of the crests, and the change in the mean beach profile due to alongshore variability. These properties agree with observations of mature rip channel systems in nature.
CitationGarnier, R. [et al.]. Mechanisms controlling crescentic bar amplitude. "Journal of geophysical research", 15 Abril 2010, vol. 115, núm. F2, p. 1-14.
URIhttp://hdl.handle.net/2117/8285
DOI10.1029/2009JF001407
ISSN0148-0227
Publisher versionhttp://adsabs.harvard.edu/abs/2010JGRF..11502007G
Collections
Share: