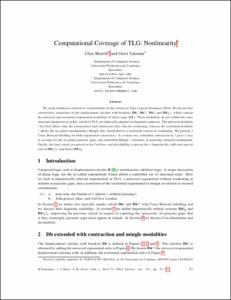 Document typeConference report
Rights accessOpen Access
Abstract
We study nonlinear connectives (exponentials) in the context of Type Logical Grammar (TLG). We devise four conservative extensions of the displacement calculus with brackets, Db!, Db!?, Db!b and Db!b?r which contain the universal and existential exponential modalities of linear logic (LL). These modalities do not exhibit the same structural properties as in LL, which in TLG are especially adapted for linguistic purposes. The universal modality ! for TLG allows only the commutative and contraction rules, but not weakening, whereas the existential modality ? allows the so-called (intuitionistic) Mingle rule, which derives a restricted version of weakening. We provide a Curry-Howard labelling for both exponential connectives. As it turns out, controlled contraction by ! gives a way to account for the so-called parasitic gaps, and controlled Mingle ? iteration, in particular iterated coordination. Finally, the four calculi are proved to be Cut-Free, and decidability is proved for a linguistically suffcient special case of Db!b?r (and hence Db!b).
CitationMorrill, G., Valentín, O. Computational coverage of TLG: nonlinearity. A: Workshop on Natural Language and Computer Science. "NLCS'15: Third Workshop on Natural Language and Computer Science". Kyoto: 2015, p. 51-63.
URIhttp://hdl.handle.net/2117/82813
Collections
Share: