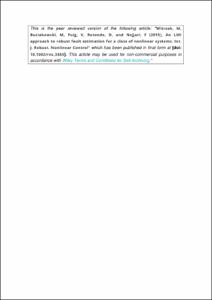 Document typeArticle
Rights accessOpen Access
Abstract
The paper presents a robust fault estimation approach for a class of nonlinear discrete-time systems. In particular, two sources of uncertainty are present in the considered class of systems, that is, an unknown input and an exogenous external disturbance. Thus, apart from simultaneous state and fault estimation, the objective is to decouple the effect of an unknown input while minimizing the influence of the exogenous external disturbance within the inline image framework. The resulting design procedure guarantees that a prescribed disturbance attenuation level is achieved with respect to the state and fault estimation error while assuring the convergence of the observer. The core advantage of the proposed approach is its simplicity by reducing the fault estimation problem to matrix inequalities formulation. In addition, the design conditions ensure the convergence of the observer with guaranteed inline image performance. The effectiveness of the proposed approach is demonstrated by its application to a twin rotor multiple-input multiple-output system
CitationWitczak, M., Buciakowski, M., Puig, V., Rotondo, D., Nejjari, F. An LMI approach to robust fault estimation for a class of nonlinear systems. "International journal of robust and nonlinear control", 01 Juny 2015, p. 1-19.
URIhttp://hdl.handle.net/2117/82598
DOI10.1002/rnc.3365
ISSN1049-8923
Collections
Share: