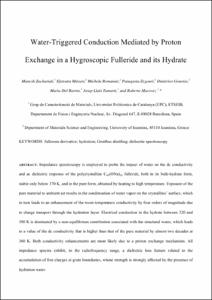 Document typeArticle
Rights accessOpen Access
Abstract
Impedance spectroscopy is employed to probe the impact of water on the dc conductivity and ac dielectric response of the polycrystalline C-60(ONa)(24) fulleride, both in its bulk-hydrate form, stable only below 370 K, and in the pure form, obtained by heating to high temperature. Exposure of the pure material to ambient air results in the condensation of water vapor on the crystallites surface, which in turn leads to an enhancement of the room-temperature conductivity by 4 orders of magnitude due to charge transport through the hydration layer. Electrical conduction in the hydrate between 320 and 380 K is dominated by a nonequilibrium contribution associated with the structural water, which leads to a value of the dc conductivity that is higher than that of the pure material by almost two decades at 360 K. Both conductivity enhancements are most likely due to a proton exchange mechanism. All impedance spectra exhibit, in the radiofrequency range, a dielectric loss feature related to accumulation of free charges at grain boundaries, whose strength is strongly affected by the presence of hydration water.
Description
This document is the unedited Author’s version of a Submitted Work that was subsequently accepted for publication in The journal of physical chemistry. Part C, nanomaterials and interfaces, copyright © American Chemical Society after peer review. To access the final edited and published work see http://pubs.acs.org/doi/ipdf/10.1021/jp509072u
CitationZachariah, M., Mitsari, E., Romanini, M., Zygouri, P., Gournis, D., Del Barrio, M., Tamarit, J. Ll., Macovez, R. Water-Triggered Conduction Mediated by Proton Exchange in a Hygroscopic Fulleride and Its Hydrate. "The journal of physical chemistry. Part C, nanomaterials and interfaces", 08 Gener 2015, vol. 119, núm. 1, p. 685-694.
URIhttp://hdl.handle.net/2117/82594
DOI10.1021/jp509072u
ISSN1932-7447
Publisher versionhttp://pubs.acs.org/doi/ipdf/10.1021/jp509072u
Collections
Share: