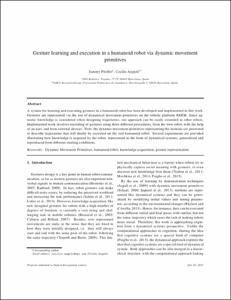 Document typeArticle
Rights accessOpen Access
Abstract
A system for learning and executing gestures in a humanoid robot has been developed and implemented in this work. Gestures are represented via the use of dynamical movement primitives on the robotic platform REEM. Since agnostic knowledge is considered when designing trajectories, our approach can be easily extended to other robots. Implemented work involves recording of gestures using three different procedures, from the Own robot, with the help of a user, and from external devices. Next, the dynamic movement primitives representing the motions are generated to describe trajectories that will finally be executed on the real humanoid robot. Several experiments are provided illustrating how knowledge is acquired by the robot, represented in the form of dynamical systems, generalized and reproduced from different starting conditions.
CitationPfeiffer, S., Angulo, C. Gesture learning and execution in a humanoid robot via dynamic movement primitives. "Pattern recognition letters", 01 Desembre 2015, vol. 67, p. 100-107.
URIhttp://hdl.handle.net/2117/82414
DOI10.1016/j.patrec.2015.07.042
ISSN0167-8655
Collections
Share: