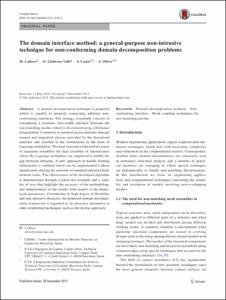 Document typeArticle
Rights accessOpen Access
European Commission's projectCOMP-DES-MAT - Advanced tools for computational design of engineering materials (EC-FP7-320815)
Abstract
A domain decomposition technique is proposed which is capable of properly connecting arbitrary non-conforming interfaces. The strategy essentially consists in considering a fictitious zero-width interface between the non-matching meshes which is discretized using a Delaunay triangulation. Continuity is satisfied across domains through normal and tangential stresses provided by the discretized interface and inserted in the formulation in the form of Lagrange multipliers. The final structure of the global system of equations resembles the dual assembly of substructures where the Lagrange multipliers are employed to nullify the gap between domains. A new approach to handle floating subdomains is outlined which can be implemented without significantly altering the structure of standard industrial finite element codes. The effectiveness of the developed algorithm is demonstrated through a patch test example and a number of tests that highlight the accuracy of the methodology and independence of the results with respect to the framework parameters. Considering its high degree of flexibility and non-intrusive character, the proposed domain decomposition framework is regarded as an attractive alternative to other established techniques such as the mortar approach.
CitationCafiero, M., Lloberas, O., Cante, J.C., Oliver, J. The domain interface method: a general-purpose non-intrusive technique for non-conforming domain decomposition problems. "Computational mechanics (Online)", Abril 2016, vol. 57, núm. 4, p. 555-581.
URIhttp://hdl.handle.net/2117/82359
DOI10.1007/s00466-015-1239-x
ISSN1432-0924
Publisher versionhttp://link.springer.com/article/10.1007/s00466-015-1239-x
Collections
Share: