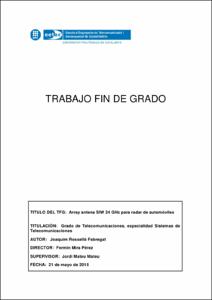 Document typeBachelor thesis
Rights accessOpen Access
Abstract
In this project a flat antenna array on Substrate Integrated Waveguide technology (SIW) has been designed, simulated and built to be used in automotive radar at 24 GHz. The software used in the simulation, configuration and optimization was Ansoft HFSS. It is one of several commercial tools used to design the antenna and RF elements. SIW technology consists of integrating a waveguide within a dielectric substrate by using rows of metalized vias. The proposed antenna consists of two substrates, the first will have the rows of metalized vias and one of its metal plates is edged and the second substrate includes patch antenna elements that are aperture coupled to the other substrate. The array will consist of two rows of radiating elements joined by a divider in SIW technology that has a microstrip-SIW taper transition. More specifically, the divider joins two linear arrays of 4 radiating elements separated &#955; / 2. Each of these linear arrays of 4 elements are formed by slot coupled patch antennas where the slots are shifted with respect to the center of the waveguide to compensate for the 180º offset that appears in the standing wave and separated &#955; / 2. These individual radiating elements consist of slots in the first substrate shifted a distance relative to the center of SIW waveguide and a patch on the second substrate coupled to the slot. The planar array has been built using a milling machine and characterized in an anechoic chamber in order to check its performance. The proposed antenna has gain levels of 13.53 dB at 24 GHz, a beam width of 25º in the H plane, a beam width of 48º in the E plane, a front-to-back ratio of 35.44 dB and a ratio of primary to secondary lobe of 13.71 dB. The work performed during this project has give rise to an international conference paper that appears in the Proceedings of IEEE Conference on Antenna Measurements & Applications (CAMA), 16-19 November 2014, Antibes (France).
SubjectsRadar -- Antennas, Radar -- Antenes
DegreeGRAU EN ENGINYERIA DE SISTEMES DE TELECOMUNICACIÓ (Pla 2009)
URIhttp://hdl.handle.net/2117/82344
Collections
Share: