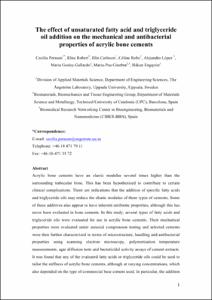 Except where otherwise noted, content on this work is licensed under a Creative Commons license : Attribution-NonCommercial-NoDerivs 3.0 Spain
Abstract
Acrylic bone cements have an elastic modulus several times higher than the surrounding trabecular bone. This has been hypothesized to contribute to certain clinical complications. There are indications that the addition of specific fatty acids and triglyceride oils may reduce the elastic modulus of these types of cements. Some of these additives also appear to have inherent antibiotic properties, although this has never been evaluated in bone cements. In this study, several types of fatty acids and triglyceride oils were evaluated for use in acrylic bone cements. Their mechanical properties were evaluated under uniaxial compression testing and selected cements were then further characterized in terms of microstructure, handling and antibacterial properties using scanning electron microscopy, polymerization temperature measurements, agar diffusion tests and bactericidal activity assays of cement extracts. It was found that any of the evaluated fatty acids or triglyceride oils could be used to tailor the stiffness of acrylic bone cements, although at varying concentrations, which also depended on the type of commercial base cement used. In particular, the addition of very small amounts of linoleic acid (<2.0wt%) resulted in Young's moduli and compressive strengths in the range of human trabecular bone, while maintaining a similar setting time. Further, the addition of 12.6wt% ricinoleic acid to Osteopal V cement was found to have a significant antibacterial effect, inhibiting growth of Staphylococcus aureus in an agar diffusion test as well as demonstrating 100% bactericidal activity against the same strain.
CitationPersson, C., Robert, E., Carlsson, E., Robo, C., López-Gil, A., Ginebra, M.P., Godoy-Gallardo, M., Engqvist, H. The effect of unsaturated fatty acid and triglyceride oil addition on the mechanical and antibacterial properties of acrylic bone cements. "Journal of biomaterials applications", 01 Setembre 2015, vol. 30, núm. 3, p. 279-289.
URIhttp://hdl.handle.net/2117/82269
DOI10.1177/0885328215581316
ISSN0885-3282
Publisher versionhttp://jba.sagepub.com/content/30/3/279
Collections
Share: