From degenerate patches to triangular and trimmed patches 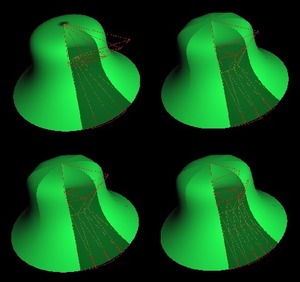 Document typeResearch report
Rights accessOpen Access
All rights reserved. This work is protected by the corresponding intellectual and industrial property rights. Without prejudice to any existing legal exemptions, reproduction, distribution, public communication or transformation of this work are prohibited without permission of the copyright holder
Abstract
CAD systems are usually based on a tensor product representation of free form surfaces. Trimmed patches provide a reasonable solution for the representation of general topologies, provided that the gap between equivalent trimming curves in the euclidean space is small enough. Several commercial CAD systems, however, represent certain non-rectangular surface regions through degenerate rectangular patches. Degenerate patches produce rendering artifacts and can lead to malfunctions in the subsequent geometric operations. In this paper, two algorithms for converting degenerate tensor-product patches into triangular and trimmed rectangular patches are presented. The algorithms are based on specific degree reduction algorithms for Bézier curves. In both algorithms, the final surface approximates the initial one in a quadratic sense while inheriting its boundary curves. In the second one, e-G^1 continuity is achieved. Approximation errors are analyzed and some examples are presented and discussed. Approximation errors can be arbitrarily decreased through the degree elevation of the degenerate patches.
CitationVigo, M., Pla, N., Brunet, P. "From degenerate patches to triangular and trimmed patches". 1995.
URIhttp://hdl.handle.net/2117/82258
Collections
Share: