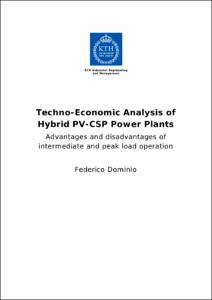 The present master thesis work deals with the techno-economic analysis of a combined PV-CSP utility scale power plant that operates to meet intermediate and peak load demand under the well-defined REIPPP price scheme in South Africa. For such analysis, a multi-objective optimization was carried out in order to find optimal plant designs for the selected market. Subsequently, the same optimization was performed for CSP alone and PV alone plants and its results used in a comparative analysis that allowed the economic feasibility of the PV-CSP combined plant to be assessed. The study is based on a utility scale Solar Tower Power Plant (STPPP) with thermal energy storage and a PV plant models previously developed, validated and implemented in an in-house tool developed in KTH for techno-economic modelling of power plants. Such models were coupled together for combined operation and a specific dispatch strategy for intermediate and peak load operation was developed. The resulting combined model was further verified by using data gathered from real PV-CSP projects currently under development and the dispatch strategy was tested by using newly implemented indicators. Additionally, a methodology for calculating the average tariff that must be granted to ensure a desired level of profitability (fixed IRR) under a Power Purchase Agreement (PPA) contract was implemented. The resulting indicator was used in the techno-economic analysis of the plant, together with other performance indicators such as CAPEX and capacity factor. The results of the multi-objective optimization show that, for the same dispatch strategy and tariff scheme, both the CSP alone and PV alone plants yielded lower average PPA prices and CAPEX than the PV-CSP hybrid. This was further confirmed by the fact that the PV capacity was minimized in all PV-CSP optimums, thus converging to a CSP only power plant. Furthermore, the CSP alone plant proved to be more flexible in varying its hourly and seasonal output levels on demand. PV alone optimum configurations all featured tracking systems to maximize power production during daytime and did not follow a peaking dispatch strategy due to the lack of a storage system. The PV-CSP hybrid solution scored higher values of capacity factor and performed better in meeting the dispatch strategy compared to the CSP alone and PV alone solutions, thus suggesting that the value of a combined plant can be increased when an operational strategy that maximizes capacity factors is sought (baseload), or when constraints are applied in terms of matching peak hours or meeting a fixed number operational hours per day.
SubjectsPhotovoltaic power systems, Instal·lacions fotovoltaiques