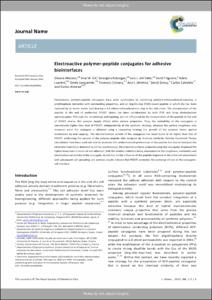 Document typeArticle
PublisherRoyal Society of Chemistry
Rights accessOpen Access
European Commission's projectMARCHES - Modelling of Architectures Ruled by Coupled or Heightened Excited States (EC-FP7-278845)
Abstract
Electroactive polymer-peptide conjugates have been synthesized by combining poly(3,4-ethylenedioxythiophene), a polythiophene derivative with outstanding properties, and an Arg-Gly-Asp (RGD)-based peptide in which Gly has been replaced by an exotic amino acid bearing a 3,4-ethylenedioxythiophene ring in the side chain. The incorporation of the peptide at the ends of preformed PEDOT chains has been corroborated by both FTIR and X-ray photoelectron spectroscopy. Although the morphology and topology are not influenced by the incorporation of the peptide at the ends of PEDOT chains, this process largely affects other surface properties. Thus, the wettability of the conjugates is considerably higher than that of PEDOT, independently of the synthetic strategy, whereas the surface roughness only increases when the conjugate is obtained using a competing strategy (i.e. growth of the polymer chains against termination by end capping). The electrochemical activity of the conjugates has been found to be higher than that of PEDOT, evidencing the success of the polymer-peptide links designed by chemical similarity. Density functional theory calculations have been used not only to ascertain the conformational preferences of the peptide but also to interpret the electronic transitions detected by UV-vis spectroscopy. Electroactive surfaces prepared using the conjugates displayed the higher bioactivities in terms of cell adhesion, with the relative viabilities being dependent on the roughness, wettability and electrochemical activity of the conjugate. In addition to the influence of the peptide fragment in the initial cell attachment and subsequent cell spreading and survival, the results indicate that PEDOT promotes the exchange of ions at the conjugate-cell interface.
CitationMaione, S., Gil, A., Fabregat, G., del Valle, LJ., Triguero, J., Laurent, A., Jacquemin, D., Estrany, F., Jimenez, A., Zanuy, D., Cativiela, C., Aleman, C. Electroactive polymer-peptide conjugates for adhesive biointerfaces. "Biomaterials science", 01 Gener 2015, vol. 3, núm. 10, p. 1395-1405.
URIhttp://hdl.handle.net/2117/82053
DOI10.1039/c5bm00160a
ISSN2047-4830
Collections
Share: