A technological overview of the guifi.net community network 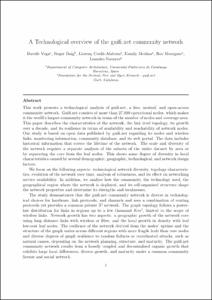 Document typeArticle
Rights accessOpen Access
European Commission's projectCONFINE - Community Networks Testbed for the Future Internet (EC-FP7-288535)
CLOMMUNITY - A Community networking Cloud in a box (EC-FP7-317879)
Abstract
This work presents a technological analysis of guifi.net, a free, neutral, and open-access community network. Guifi.net consists of more than 27,000 operational nodes, which makes it the world’s largest community network in terms of the number of nodes and coverage area. This paper describes the characteristics of the network, the link level topology, its growth over a decade, and its resilience in terms of availability and reachability of network nodes. Our study is based on open data published by guifi.net regarding its nodes and wireless links, monitoring information, community database, and its web portal. The data includes historical information that covers the lifetime of the network. The scale and diversity of the network requires a separate analysis of the subsets of the entire dataset by area or by separating the core from the leaf nodes. This shows some degree of diversity in local characteristics caused by several demographic, geographic, technological, and network design factors. We focus on the following aspects: technological network diversity, topology characteristics, evolution of the network over time, analysis of robustness, and its effect on networking service availability. In addition, we analyse how the community, the technology used, the geographical region where the network is deployed, and its self-organised structure shape the network properties and determine its strengths and weaknesses. The study demonstrates that the guifi.net community network is diverse in technological choices for hardware, link protocols, and channels and uses a combination of routing protocols yet provides a common private IP network. The graph topology follows a power- law distribution for links in regions up to a few thousand Km 2 , limited to the scope of wireless links. Network growth has two aspects: a geographic growth of the network core using long distance links with wireless or fibre, and the local growth in density with leaf low-cost leaf nodes. The resilience of the network derived from the nodes’ uptime and the structure of the graph varies across different regions with more fragile leafs than core nodes and diverse degrees of graph resilience to random failures or coordinated attacks, such as natural causes, depending on the network planning, structure, and maturity. The guifi.net community network results from a loosely coupled and decentralised organic growth that exhibits large local differences, diverse growth, and maturity under a common community license and social network.
CitationVega, D., Baig, R., Cerdà, L., Medina, E., Meseguer, R., Navarro, L. A technological overview of the guifi.net community network. "Computer networks", 24 Desembre 2015, vol. 93, Part 2, p. 260-278.
URIhttp://hdl.handle.net/2117/82018
DOI10.1016/j.comnet.2015.09.023
ISSN1389-1286
Publisher versionhttp://www.sciencedirect.com/science/article/pii/S1389128615003436
Collections
Share: