The Paris Agreement: highlights of a historical agreement 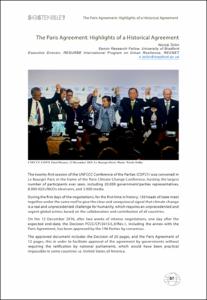 Show full item record
Tollin, Nicola
Document typeArticle
PublisherCàtedra UNESCO de Sostenibilitat de la UPC
Rights accessOpen Access
Abstract
The twenty-first session of the UNFCCC Conference of the Parties (COP21) was convened in Le Bourget Paris in the frame of the Paris Climate Change Conference, hosting the largest number of participants ever seen, including 20.000 government/parties representatives, 8.000 IGOs/NGOs observers, and 3.000 media. During the first days of the negotiations, for the first time in history, 150 heads of state meet together under the same roof to give the clear and unequivocal signal that climate change is a real and unprecedented challenge for humanity, which requires an unprecedented and urgent global action, based on the collaboration and contribution of all countries. On the 12 December 2016, after two weeks of intense negotiations, one day after the expected end-date, the Decision FCCC/CP/2015/L.9/Rev.1, including the annex with the Paris Agreement, has been approved by the 196 Parties by consensus. The approved document includes the Decision of 20 pages, and the Paris Agreement of 12 pages, this in order to facilitate approval of the agreement by governments without requiring the ratification by national parliaments, which would have been practical impossible in some countries i.e. United States of America. The Paris Agreement is a universal and legally binding agreement, providing a solid architecture and ambitious targets, coordinating and mainstreaming action to face climate change challenge globally. The Decision, which is non-legally binding, contains fundamental provisions and a clear work plan/timeline to put flash on bones on the Paris Agreement itself, particularly enhancing action prior to 2020.
CitationTollin, Nicola. The Paris Agreement: highlights of a historical agreement. "Sostenible?", Desembre 2015, núm. 16, p. 67-71.
URIhttp://hdl.handle.net/2117/82006
Collections
Share: