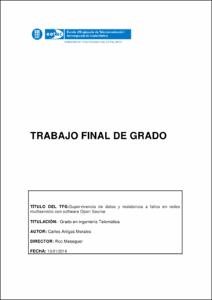 Document typeBachelor thesis
Rights accessOpen Access
Abstract
The goal in this project is to design multifunction server, reliable and safe. Two different topics will be described, one of them related on corporation field and the other one related with home. This project describes both scenarios, the corporative one's implements a data security system where information would be secure using physical protection or software protection. The one focused on home, ease the user access to get multimedia content and protect data using similar mechanism of corporation one. In the introduction , reader will be introduce in a bunch of problems and how and why FreeNAS it's the tool chosen to get issue solved. In used technologies, it is explained the many technologies that would be applied in both scenarios .This it is presented to the reader to avoid missing some important concept. In chapter 4 and 5 the scenarios would be described and would be exposed how FreeNAS would offer many appliance. The project would be concluded explaining which possible appliances would be able to be implemented using FreeNAS Tool and forecasting implementations In the annexes, explanations would get in to deeper understanding to avoid hinder the and try to provide more details. This project has been designed, implemented and thought by Carles Artigas Morales FreeNAS offers as well hundreds of new possibilities that couldn't been implemented in this project due the hugeness of possibilities that FreeNAS offers . All possibilities have the same capabilities as the ones implemented
SubjectsOpen source software, Programari
URIhttp://hdl.handle.net/2117/81951
Collections
Share: