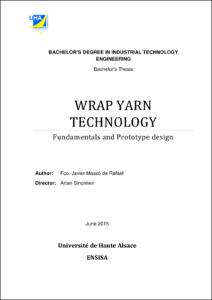 Document typeBachelor thesis
Rights accessOpen Access
Abstract
In textile world, nearly all types of yarns that one can imagine can be created. Some of them are easier to create, and some others have to deal with more accurate processes. Those yarns made out of fibers which are difficult to be treated are sometimes wrapped by a filament in order to give them the consistence needed to develop the yarn. These particular types of yarns are called wrap yarns. According to that, the primordial aim of the project is to set the ideas of a future prototype able to create wrap yarns. To achieve it, it has been done a general study of the existing machines and possible alternatives. The prototype that is being sought would have to enable the study and creation of different types of wrap yarns. For this reason, it has been tried to develop a prototype able to deal with some particular features to create different types of yarns. Those features taken into account are the following: - The prototype should have to be able to treat all types of length fibers (long and short fibers). - The prototype should have to be able to create yarns out of ribbon or roving. In order to accomplish the objective of the project, first of all it has been studied what the prototype needs to have. Once the general idea of the prototype has been set, it has been discussed about how this idea could be achieved. In other words, which are the alternatives that can make the idea became into a reality. Once the brainstorming of alternatives has reached all of the possibilities, those which are more suitable are the ones that have been described and analyzed. By now, the possibility of developing the prototype looks more achievable and more documented and studied. Besides the main objective, there are other two more simple objectives that are also wanted to be achieved. Both objectives are related with extending the knowledge in textile engineering. On the one hand, the first aim is to get to know the fibers and their properties. On the other hand, familiarize with the manufacturing process that fibers follow to be converted into yarns and inquire into its last stage, the spinning stage. To achieve those objectives, some books have been greatly useful. Specifically: The Rieter Manual of Spinning; and Fundamentals of Spun Yarn Technology.
SubjectsYarn -- Manufacturing processes, Spinning, Fils -- Fabricació, Filatura
URIhttp://hdl.handle.net/2117/81913
Collections
Share: