The subductability of continental lithosphere: the before and after story 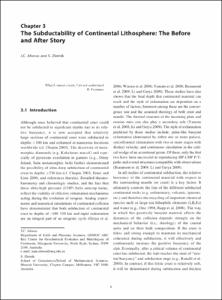 Document typeArticle
Rights accessOpen Access
Abstract
The temporal evolution of internal forces in a collision environment controls first-order characteristics such as convergence rate, slab dip, subduction stall, and slab breakoff, amongst others. Foremost among these forces are the positive buoyancy provided by the subduction of felsic continental material and the negative buoyancy associated with the slab. In this work we use fully dynamic thermomechanical models coupled with thermodynamic/petrological formalisms to study the evolution of these forces during a continent–arc/microcontinent collision and their influence on the large-scale dynamics of the system. Two distinctive features of our models that allow a self-consistent assessment of collision dynamics are: (1) the use of a new thermodynamic database valid up to ~25–30 GPa that includes most of the major phases relevant to continental subduction, and (2) a fully dynamic approach in which no velocities are imposed to either force or stop subduction. The former allows realistic computations of the buoyancy forces driving the system as a function of P-T-composition. The latter assures that computed velocities emerge self-consistently in our simulations in response to the balance between internal forces in our numerical domain. The main results from our experiments can be summarized as follows. (1) The delamination of the lithospheric mantle after a short episode of continental subduction is a viable scenario to end continental subduction; the associated evolution of convergence is comparable to those proposed for real collision setting. (2) We corroborate previous results showing that the main control on the dynamics and final configuration (type of slab breakoff) of the collision is the rheology and composition of the continental crust; strong mafic crusts favor deep subduction and recycling of significant volumes of continental material, while soft felsic crusts preclude them. (3) Subducted continental crust remains buoyant with respect to the surrounding mantle down to depths of ~250–300 km, thus allowing exhumation of deeply subducted crust as long as a detachment from the slab occurs. (4) Realistic compositional stratifications in the continental lithospheric mantle exert only a modest influence on the overall evolution of the collision system. (5) Subducted continental crust to depths >250–300 km becomes significantly denser than the surrounding mantle due to the appearance in the solid assemblage of high-density phases such as hollandite and stishovite; this provides extra negative buoyancy to the slab and precludes the exhumation of crustal components. This supports the idea of the existence of a “depth of no return” for continental material at around 250 km depth.
CitationAfonso, J., Zlotnik, S. The subductability of continental lithosphere: the before and after story. "Frontiers in Earth Sciences", 2011, vol. 1, p. 53-86.
URIhttp://hdl.handle.net/2117/81857
DOI10.1007/978-3-540-88558-0_3
ISSN1863-4621
Collections
Share: