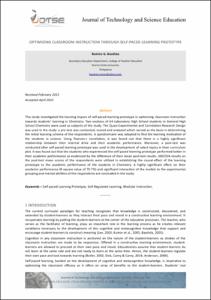 Show full item record
Bautista, Romiro Gordo
Document typeArticle
PublisherOmniaScience
Rights accessOpen Access
Abstract
This study investigated the learning impact of self-paced learning prototype in optimizing classroom instruction towards students’ learning in Chemistry. Two sections of 64 Laboratory High School students in Chemistry were used as subjects of the study. The Quasi-Experimental and Correlation Research Design was used in the study: a pre-test was conducted, scored and analyzed which served as the basis in determining the initial learning schema of the respondents. A questionnaire was adopted to find the learning motivation of the students in science. Using Pearson-r correlation, it was found out that there is a highly significant relationship between their internal drive and their academic performance. Moreover, a post-test was conducted after self-paced learning prototype was used in the development of select topics in their curricular plot. It was found out that the students who experienced the self-paced learning prototype performed better in their academic performance as evidenced by the difference of their mean post-test results. ANCOVA results on the post-test mean scores of the respondents were utilized in establishing the causal-effect of the learning prototype to the academic performance of the students in Chemistry. A highly significant effect on their academic performance (R-square value of 70.7%) and significant interaction of the models to the experimental grouping and mental abilities of the respondents are concluded in the study
CitationBautista, Romiro Gordo. Optimizing classroom instruction through self-paced learning prototype. "Journal of Technology and Science Educaton (JOTSE)", Setembre 2015, vol. 5, núm. 3, p. 184-193.
URIhttp://hdl.handle.net/2117/81744
DLB-2000-2012
ISSN2013-6374
2014-5349
Collections
Share: