Do we really need a large number of particles to simulate bimolecular reactive transport with random walk methods? A kernel density estimation approach 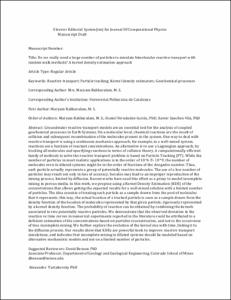 Document typeArticle
Rights accessOpen Access
Abstract
Random walk particle tracking methods are a computationally efficient family of methods to solve reactive transport problems. While the number of particles in most realistic applications is in the order of 106–109106–109, the number of reactive molecules even in diluted systems might be in the order of fractions of the Avogadro number. Thus, each particle actually represents a group of potentially reactive molecules. The use of a low number of particles may result not only in loss of accuracy, but also may lead to an improper reproduction of the mixing process, limited by diffusion. Recent works have used this effect as a proxy to model incomplete mixing in porous media. In this work, we propose using a Kernel Density Estimation (KDE) of the concentrations that allows getting the expected results for a well-mixed solution with a limited number of particles. The idea consists of treating each particle as a sample drawn from the pool of molecules that it represents; this way, the actual location of a tracked particle is seen as a sample drawn from the density function of the location of molecules represented by that given particle, rigorously represented by a kernel density function. The probability of reaction can be obtained by combining the kernels associated to two potentially reactive particles. We demonstrate that the observed deviation in the reaction vs time curves in numerical experiments reported in the literature could be attributed to the statistical method used to reconstruct concentrations (fixed particle support) from discrete particle distributions, and not to the occurrence of true incomplete mixing. We further explore the evolution of the kernel size with time, linking it to the diffusion process. Our results show that KDEs are powerful tools to improve computational efficiency and robustness in reactive transport simulations, and indicates that incomplete mixing in diluted systems should be modeled based on alternative mechanistic models and not on a limited number of particles.
CitationRahbaralam, M., Fernandez, D., Sanchez, F. Do we really need a large number of particles to simulate bimolecular reactive transport with random walk methods? A kernel density estimation approach. "Journal of computational physics", Desembre 2015, vol. 303, p. 95-104.
URIhttp://hdl.handle.net/2117/81681
DOI10.1016/j.jcp.2015.09.030
ISSN0021-9991
Publisher versionhttp://www.sciencedirect.com/science/article/pii/S0021999115006233
Collections
Share: