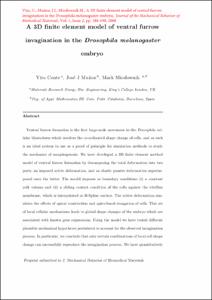 Miodownik, Mark
Document typeArticle
Rights accessOpen Access
Abstract
The paper describes a mechanical model of epithelial tissue development in Drosophila embryos to investigate a buckling phenomenon called invagination. The finite element method is used to model this ventral furrow formation in 3D by decomposing the total deformation into two parts: an imposed active deformation, and an elastic passive deformation superimposed onto the latter. The model imposes as boundary conditions (i) a constant yolk volume and (ii) a sliding contact condition of the cells against the vitelline membrane, which is interpolated as a B-Spline surface. The active deformation simulates the effects of apical constriction and apico-basal elongation of cells. This set of local cellular mechanisms leads to global shape changes of the embryo which are associated with known gene expressions. Using the model we have tested different plausible hypotheses postulated to account for the mechanical behaviour of epithelial tissues. In particular, we conclude that only certain combinations of local cell shape change can successfully reproduce the invagination process. We have quantitatively compared the model with a 2D model and shown that it exhibits a more robust invagination phenomenon. The 3D model has also revealed that invagination causes a yolk flow from the central region to the anterior and posterior ends of the embryo, causing an accordion-like global compression and expansion wave to move through the embryo. Such a phenomenon cannot be described by 2D models.
CitationConte, V.; Muñoz, José J.; Miodownik, M. A 3D finite element model of ventral furrow invagination in the Drosophila melanogaster embryo. "Journal of the mechanical behavior of biomedical materials", Abril 2008, vol. 1, núm. 2, p. 188-198.
URIhttp://hdl.handle.net/2117/8161
DOI10.1016/j.jmbbm.2007.10.002
ISSN1751-6161
Collections
Share: