Finite element analysis of the Cingulata jaw: an ecomorphological approach to Armadillo's diets 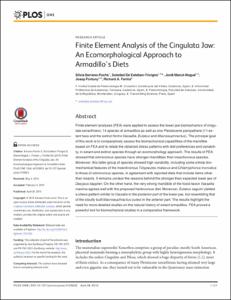 Fariña, Richard
Document typeArticle
Rights accessOpen Access
European Commission's projectSYNTHESYS - Synthesis of Systematic Resources (EC-FP7-226506)
Abstract
Finite element analyses (FEA) were applied to assess the lower jaw biomechanics of cingulate xenarthrans: 14 species of armadillos as well as one Pleistocene pampathere (11 extant taxa and the extinct forms Vassallia, Eutatus and Macroeuphractus). The principal goal of this work is to comparatively assess the biomechanical capabilities of the mandible based on FEA and to relate the obtained stress patterns with diet preferences and variability, in extant and extinct species through an ecomorphology approach. The results of FEA showed that omnivorous species have stronger mandibles than insectivorous species. Moreover, this latter group of species showed high variability, including some similar biomechanical features of the insectivorous Tolypeutes matacus and Chlamyphorus truncatus to those of omnivorous species, in agreement with reported diets that include items other than insects. It remains unclear the reasons behind the stronger than expected lower jaw of Dasypus kappleri. On the other hand, the very strong mandible of the fossil taxon Vassallia maxima agrees well with the proposed herbivorous diet. Moreover, Eutatus seguini yielded a stress pattern similar to Vassalia in the posterior part of the lower jaw, but resembling that of the stoutly built Macroeuphractus outesi in the anterior part. The results highlight the need for more detailed studies on the natural history of extant armadillos. FEA proved a powerful tool for biomechanical studies in a comparative framework.
CitationSerrano-Fochs, S., Esteban-Trivigno, S., Marcé-Nogué, J., Fortuny, J., Fariña, R. Finite element analysis of the Cingulata jaw: an ecomorphological approach to Armadillo's diets. "PLoS one", 28 Abril 2015, vol. 10, núm. 4, p. 1-21.
URIhttp://hdl.handle.net/2117/81548
DOI10.1371/journal.pone.0120653
ISSN1932-6203
Publisher versionhttp://journals.plos.org/plosone/article?id=10.1371/journal.pone.0120653
Collections
Share: