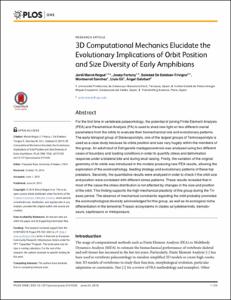 Galobart, Àngel
Document typeArticle
Rights accessOpen Access
ProjectSYNTHESYS - Synthesis of Systematic Resources (EC-FP7-226506)
Abstract
For the first time in vertebrate palaeontology, the potential of joining Finite Element Analysis (FEA) and Parametrical Analysis (PA) is used to shed new light on two different cranial parameters from the orbits to evaluate their biomechanical role and evolutionary patterns. The early tetrapod group of Stereospondyls, one of the largest groups of Temnospondyls is used as a case study because its orbits position and size vary hugely within the members of this group. An adult skull of Edingerella madagascariensis was analysed using two different cases of boundary and loading conditions in order to quantify stress and deformation response under a bilateral bite and during skull raising. Firstly, the variation of the original geometry of its orbits was introduced in the models producing new FEA results, allowing the exploration of the ecomorphology, feeding strategy and evolutionary patterns of these top predators. Secondly, the quantitative results were analysed in order to check if the orbit size and position were correlated with different stress patterns. These results revealed that in most of the cases the stress distribution is not affected by changes in the size and position of the orbit. This finding supports the high mechanical plasticity of this group during the Triassic period. The absence of mechanical constraints regarding the orbit probably promoted the ecomorphological diversity acknowledged for this group, as well as its ecological niche differentiation in the terrestrial Triassic ecosystems in clades as lydekkerinids, trematosaurs, capitosaurs or metoposaurs.
CitationMarcé-Nogué, J., Fortuny, J., Sanchez, M., Esteban-Trivigno, S., Gil, L., Galobart, À. 3D computacional mechanics elucidate the evolutionary implications of orbit position and size diversity of early amphibians. "PLoS one", 24 Juny 2015, vol. 10, núm. 6, p. 1-23.
URIhttp://hdl.handle.net/2117/81544
DOI10.1371/journal.pone.0131320
ISSN1932-6203
Publisher versionhttp://journals.plos.org/plosone/article?id=10.1371/journal.pone.0131320
Collections
Share: