Kinematic study, calculations and electro-mechanic layout of an innovative Person lifter for hospitals and nursing homes 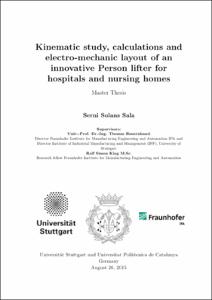 Except where otherwise noted, content on this work is licensed under a Creative Commons license : Attribution-NonCommercial-NoDerivs 3.0 Spain
Abstract
Patients who cannot move on their own are nowadays in the vast majority being han- dled manually by the nursery personnel. The aim of this project is to advance on the creation of a robot to lift and comfortably transport this patients without the need of human strength, reducing dramatically injuries among the nurses and saving time. To achieve such an important goal, it must not only be efficient and safe, but also affordable for most hospitals and nursing homes. Intensive research on existing and projected devices and robots with similar intentions has been conducted, patents have as well been investigated. In the same way, it has been established which features and, which positions should the device reach, which speed range should it maintain and which kind of testing will it have to overcome according to norms. As a second part of the project, several movement options have been studied, leading to a number of device concepts which are further developed in this project. During this phase, the viability of each concept is discussed using criteria as efficiency, stability, num- ber of necessary actuators or degrees of freedom. Later on, after choosing the final concept, the mechanical design phase begins, using mainly DS Solidworks. This part includes several structural and section calculations and finite element analysis, performed with Ansys Workbench 14.5 Student version, which help to sustain the taken decisions or to prove the resistance of some components. The actuation system and power transmission are also decided in this chapter. In the end a solid design using new components and existing devices not related to person lifting in new ways, with a large part of the components already engineered almost ready to be ordered for a prototype to be build, is obtained.
SubjectsKinematics, Hospital patients -- Equipment and Supplies, Hoisting machinery, Cinemàtica, Hospitals—Pacients -- Aparells i accessoris, Maquinària elevadora
URIhttp://hdl.handle.net/2117/81508
Collections
Share: