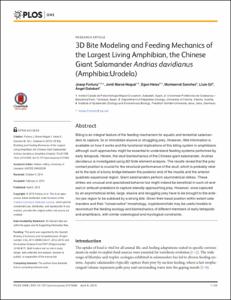 Galobart, Àngel
Document typeArticle
Rights accessOpen Access
Abstract
Biting is an integral feature of the feeding mechanism for aquatic and terrestrial salamanders to capture, fix or immobilize elusive or struggling prey. However, little information is available on how it works and the functional implications of this biting system in amphibians although such approaches might be essential to understand feeding systems performed by early tetrapods. Herein, the skull biomechanics of the Chinese giant salamander, Andrias davidianus is investigated using 3D finite element analysis. The results reveal that the prey contact position is crucial for the structural performance of the skull, which is probably related to the lack of a bony bridge between the posterior end of the maxilla and the anterior quadrato-squamosal region. Giant salamanders perform asymmetrical strikes. These strikes are unusual and specialized behavior but might indeed be beneficial in such sit-and-wait or ambush-predators to capture laterally approaching prey. However, once captured by an asymmetrical strike, large, elusive and struggling prey have to be brought to the anterior jaw region to be subdued by a strong bite. Given their basal position within extant salamanders and their
CitationFortuny, J., Marcé-Nogué, J., Heiss, E., Sanchez, M., Gil, L., Galobart, À. 3D bite modeling and feeding mechanics of the largest living amphibian, the Chinese Giant Salamander Andrias davidianus (Amphibia:Urodela). "PLoS one", 08 Abril 2015, vol. 10, núm. 4, p. 1-20.
URIhttp://hdl.handle.net/2117/81462
DOI10.1371/journal.pone.0121885
ISSN1932-6203
Publisher versionhttp://journals.plos.org/plosone/article?id=10.1371/journal.pone.0121885
Collections
Share: