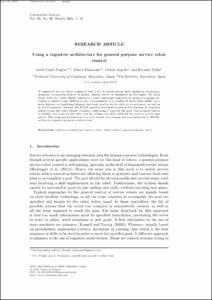 Téllez Lara, Ricardo
Document typeArticle
Rights accessOpen Access
Abstract
A humanoid service robot equipped with a set of simple action skills including navigating, grasping, recognising objects or people, among others, is considered in this paper. By using those skills the robot should complete a voice command expressed in natural language encoding a complex task (defined as the concatenation of a number of those basic skills). As a main feature, no traditional planner has been used to decide skills to be activated, as well as in which sequence. Instead, the SOAR cognitive architecture acts as the reasoner by selecting which action the robot should complete, addressing it towards the goal. Our proposal allows to include new goals for the robot just by adding new skills (without the need to encode new plans). The proposed architecture has been tested on a human-sized humanoid robot, REEM, acting as a general purpose service robot.
CitationPuigbo, J., Pumarola, A., Angulo, C., Téllez, R. Using a cognitive architecture for general purpose service robot control. "Connection science", 03 Abril 2015, vol. 27, núm. 2, p. 105-117.
URIhttp://hdl.handle.net/2117/81396
DOI10.1080/09540091.2014.968093
ISSN0954-0091
Collections
Share: