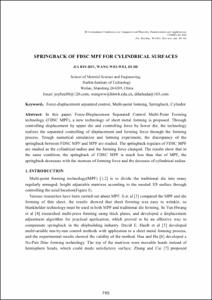 In this paper, Force-Displacement Separated Control Multi-Point Forming technology (FDSC MPF), a new technology of sheet metal forming isproposed. Through controlling displacement by upper die and controlling force by lower die, the technology realizes the separated controlling of displacement and forming force through the forming process.Trough numerical simulation and forming experiment,the discrepancy of the springback between FDSC MPF and MPF are studied. The springback regulars of FDSC MPF arestudied as the cylindrical radiusand the forming force changed.The results show that in the same condition, the springback of FDSC MPF is much less than that of MPF, the springback decreases with the increase of forming force and the decrease of cylindrical radius.
CitationJia, Bin-Bin; Wang, Wei-Wei; Di, He. Springback of FDSC MPF for cylindrical surfaces. A: COMPLAS XIII. "COMPLAS XIII : proceedings of the XIII International Conference on Computational Plasticity : fundamentals and applications". CIMNE ed. Barcelona: CIMNE, 2015, p. 795-802.
URIhttp://hdl.handle.net/2117/81379
ISBN978-84-944244-6-5