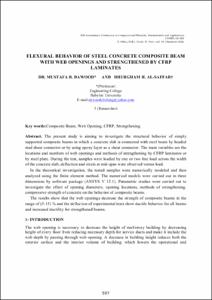 Show full item record
Dawood, Mustafa B.
Al-Saffar, Dhurgham H.
Document typeConference lecture
PublisherCIMNE
Rights accessOpen Access
Abstract
The present study is aiming to investigate the structural behavior of simply supported composite beams in which a concrete slab is connected withsteel beam by headed stud shear connector or by using epoxy layer as a shear connector. The main variables are the locations and numbers of web openings and methods of strengthening by CFRP laminates or by steel plate. During the test, samples were loaded by one or two line load across the width of the concrete slab; deflection and strain at mid-span were observed versus load.In the theoretical investigation, the tested samples were numerically modeled and then analyzed using the finite element method. The numerical models were carried out in three dimensions by software package (ANSYS V 12.1). Parametric studies were carried out to investigate the effect of opening diameters, opening locations, methods of strengthening, compressive strength of concrete onthe behavior of composite beams.The results show that the web openings decrease the strength of composite beams in the range of (5-15) % and the deflection of experimental tests show ductile behavior for all beams and increased ductility for strengthened beams.
CitationDawood, Mustafa B.; Al-Saffar, Dhurgham H. Flexural behavior of steel concrete composite beam with web openings and strengthened by CFRP laminates. A: COMPLAS XIII. "COMPLAS XIII : proceedings of the XIII International Conference on Computational Plasticity : fundamentals and applications". CIMNE ed. Barcelona: CIMNE, 2015, p. 507-518.
URIhttp://hdl.handle.net/2117/81368
ISBN978-84-944244-6-5
Collections
Share: