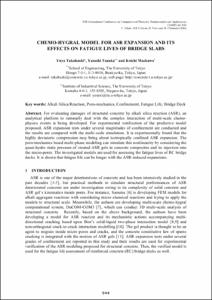 For evaluating damages of structural concrete by alkali silica reaction (ASR), an analytical platform to rationally deal with the complex interaction of multi-scale chemo- physics events is being developed. For experimental verification of the predictive model proposed, ASR expansion tests under several magnitudes of confinement are conducted and the results are compared with the multi-scale simulation. It is experimentally found that the highly deviatoric compression may bring about isotropically confined ASR expansion. The poro-mechanics based multi-phase modeling can simulate this nonlinearity by considering the quasi-hydro static pressure of created ASR gels in concrete composites and its injection into the micro-pores. The investigated models are used for assessing the fatigue lives of RC bridge decks. It is shown that fatigue life can be longer with the ASR-induced expansions.
CitationTakahashi, Yuya; Tanaka, Yasushi; Maekawa, Koichi. Chemo-hygral model for asr expansion and its effects on fatigue lives of bridge slabs. A: COMPLAS XIII. "COMPLAS XIII : proceedings of the XIII International Conference on Computational Plasticity : fundamentals and applications". CIMNE ed. Barcelona: CIMNE, 2015, p. 944-955.
URIhttp://hdl.handle.net/2117/81359
ISBN978-84-944244-6-5