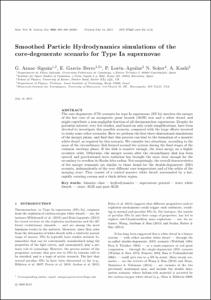 Except where otherwise noted, content on this work is licensed under a Creative Commons license : Attribution-NonCommercial-NoDerivs 3.0 Spain
Abstract
The core-degenerate scenario for Type Ia supernovae involves the merger of the hot core of an asymptotic giant branch star and a white dwarf, and might contribute a non-negligible fraction of all thermonuclear supernovae. Despite its potential interest, very few studies, and based on only crude simplifications, have been devoted to investigate this possible scenario, compared with the large efforts invested to study some other scenarios. Here we perform the first three-dimensional simulations of the merger phase, and find that this process can lead to the formation of a massive white dwarf, as required by this scenario. We consider two situations, according to the mass of the circumbinary disc formed around the system during the final stages of the common envelope phase. If the disc is massive enough, the stars merge on a highly eccentric orbit. Otherwise, the merger occurs after the circumbinary disc has been ejected and gravitational wave radiation has brought the stars close enough for the secondary to overflow its Roche lobe radius. Not surprisingly, the overall characteristics of the merger remnants are similar to those found for the double-degenerate scenario, independently of the very different core temperature and of the orbits of the merging stars. They consist of a central massive white dwarf, surrounded by a hot, rapidly rotating corona and a thick debris region.
CitationAznar, G., Garcia-berro, E., Loren, P., Soker, N., Kashi, A. Smoothed particle hydrodynamics simulations of the core-degenerate scenario for Type Ia supernovae. "Monthly notices of the Royal Astronomical Society", 01 Juliol 2015, vol. 450, núm. 3, p. 2948-2962.
URIhttp://hdl.handle.net/2117/81353
DOI10.1093/mnras/stv824
ISSN0035-8711
Collections
Share: