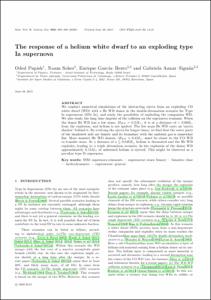 Except where otherwise noted, content on this work is licensed under a Creative Commons license : Attribution-NonCommercial-NoDerivs 3.0 Spain
Abstract
We conduct numerical simulations of the interacting ejecta from an exploding CO white dwarf (WD) with a He WD donor in the double-detonation scenario for Type Ia supernovae (SNe Ia), and study the possibility of exploding the companion WD. We also study the long time imprint of the collision on the supernova remnant. When the donor He WD has a low mass, M-WD = 0.2 M-circle dot, it is at a distance of similar to 0.08 R-circle dot from the explosion, and helium is not ignited. The low-mass He WD casts an 'ejecta shadow' behind it. By evolving the ejecta for longer times, we find that the outer parts of the shadowed side are fainter and its boundary with the ambient gas is somewhat flat. More massive He WD donors, M-WD similar or equal to 0.4 M-circle dot, must be closer to the CO WD to transfer mass. At a distance of a less than or similar to 0.045R(circle dot) helium is detonated and the He WD explodes, leading to a triple detonation scenario. In the explosion of the donor WD approximately 0.15M(circle dot) of unburned helium is ejected. This might be observed as a peculiar Type Ib supernova.
CitationPapish, O., Soker, N., Garcia-berro, E., Aznar, G. The response of a helium white dwarf to an exploding Type Ia supernova. "Monthly notices of the Royal Astronomical Society", 01 Maig 2015, vol. 449, núm. 1, p. 942-954.
URIhttp://hdl.handle.net/2117/81352
DOI10.1093/mnras/stv337
ISSN0035-8711
Collections
Share: