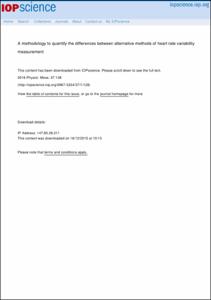 Document typeArticle
PublisherInstitute of Physics (IOP)
Rights accessOpen Access
Abstract
This work proposes a systematic procedure to report the differences between heart rate variability time series obtained from alternative measurements reporting the spread and mean of the differences as well as the agreement between measuring procedures and quantifying how stationary, random and normal the differences between alternative measurements are. A description of the complete automatic procedure to obtain a differences time series (DTS) from two alternative methods, a proposal of a battery of statistical tests, and a set of statistical indicators to better describe the differences in RR interval estimation are also provided. Results show that the spread and agreement depend on the choice of alternative measurements and that the DTS cannot be considered generally as a white or as a normally distributed process. Nevertheless, in controlled measurements the DTS can be considered as a stationary process.
CitationGarcia, M., Fernandez, M., Guede, F., Ferrer, V., Argelagós, A., Álvarez-Gómez, L., Parrado , E., Moreno, J., Capdevila, Ll., Ramos, J. A methodology to quantify the differences between alternative methods of heart rate variability measurement. "Physiological measurement", 14 Desembre 2015, núm. 37, p. 128-144.
URIhttp://hdl.handle.net/2117/81315
DOI10.1088/0967-3334/37/1/128
ISSN0967-3334
Publisher versionhttp://iopscience.iop.org/article/10.1088/0967-3334/37/1/128/meta;jsessionid=82644F56AB15A8989E3D666D543E0CF5.c4.iopscience.cld.iop.org
Collections
Share: