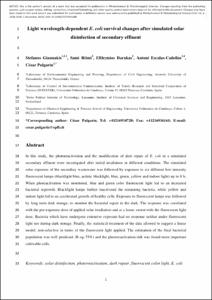 Except where otherwise noted, content on this work is licensed under a Creative Commons license : Attribution-NonCommercial-NoDerivs 3.0 Spain
Abstract
In this study, the photoreactivation and the modification of dark repair of E. coli in a simulated secondary effluent were investigated after initial irradiation in different conditions. The simulated solar exposure of the secondary wastewater was followed by exposure to six different low-intensity fluorescent lamps (blacklight blue, actinic blacklight, blue, green, yellow and indoor light) up to 8 h. When phoreactivation was monitored, blue and green color fluorescent light led to an increased bacterial regrowth. Blacklight lamps further inactivated the remaining bacteria, while yellow and indoor light led to an accelerated growth of healthy cells. Exposure to fluorescent lamps was followed by long term dark storage, to monitor the bacterial repair in the dark. The response was correlated with the pre-exposure dose of applied solar irradiation and at a lesser extent with the fluorescent light dose. Bacteria which have undergone extensive exposure had no response neither under fluorescent light nor during dark storage. Finally, the statistical treatment of the data allowed to suggest a linear model, non-selective in terms of the fluorescent light applied. The estimation of the final bacterial population was well predicted (R-sq~75%) and the photoreactivation risk was found more important cultivable cells
CitationGiannakis, S., Ritmi, S., Darakas, E., Escalas-Cañellas, A., Pulgarin, C. Light wavelength-dependent E. coli survival changes after simulated solar disinfection of secondary effluent. "Photochemical and photobiological sciences", 01 Desembre 2015, vol. 14, núm. 12, p. 2238-2250.
URIhttp://hdl.handle.net/2117/81291
DOI10.1039/c5pp00110b
ISSN1474-905X
Publisher versionhttp://pubs.rsc.org/en/content/articlepdf/2015/pp/c5pp00110b
Collections
Share: