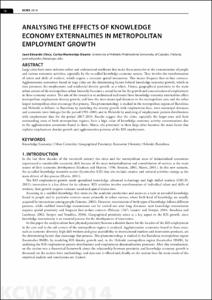 Document typeConference report
PublisherTallinn University
Rights accessOpen Access
Abstract
Large cities have some inherent urban and architectural attributes that make them attractive to the concentration of people and various economic activities, especially by the so-called knowledge economy sectors. They involve the transformation of talent and skills of workers, which require a constant spatial interaction. This means frequent face-to-face contacts. Agglomeration economies found in large cities are the determining factors behind knowledge economy growth, which in turn promotes the employment and residential density growth, as a whole. Hence, geographical proximity to the main urban centers of the metropolitan urban hierarchy becomes a causal factor for the growth and concentration of employment in these economy sectors. The aim of the research is to understand and model how knowledge economy externalities affect metropolitan employment density growth, and how the inter-municipal distances to the metropolitan core and the other largest metropolitan cities encourage that process. This phenomenology is studied in the metropolitan regions of Barcelona and Helsinki as follows: in Barcelona by modeling the density growth with employment data, inter-municipal distances and economic inter-linkages for the period 1991-2001; and in Helsinki by analyzing of employment pattern distributions with employment data for the period 2007-2010. Results suggest that the cities, especially the larger ones and their surrounding areas of both metropolitan regions, have a high value of knowledge economy activity concentrations due to the agglomeration economies found in them. Hence, the proximity to these large cities becomes the main factor that explains employment density growth and agglomeration patterns of the KIS employment.
CitationChica, J., Marmolejo, C. Analyzing the effects of knowledge economy externalities in metropolitan employment growth. A: Knowledge Cities World Summit. "Procedings of The 7th Knowledge Cities World Summit". Tallin: Tallinn University, 2014, p. 16-24.
URIhttp://hdl.handle.net/2117/81281
ISBN978-9949-29-170-0
Publisher versionhttps://www.tlu.ee/UserFiles/Konverentsikeskus/KCWS/KCWS%20proceedings.pdf
Collections
Share: